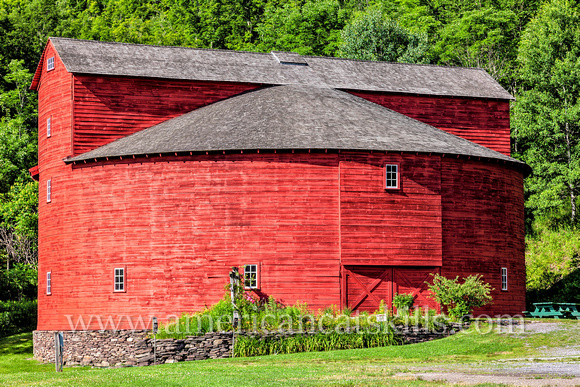 The picturesque Kelly Brothers Round Barn was constructed in 1893 as part of a then operating dairy farm. The circular barn is two stories tall, approximately 90 feet in diameter and rests on a solid stone foundation. The ground floor of the barn housed the cows, while the second floor functioned as hay storage. According to its application for the national registry, the barn is “architecturally and historically significant as one of the earliest entirely round barns in the state and as one of the first examples to feature a round silo at the center.” The barn is listed on the National Register of Historic Places.

The barn is named for the Kelly family, who were among the first settlers in Halcottsville. David Kelly settled here in the early 1800s and quickly established his grist mill business by building a wooden dam on the East Branch of the Delaware. In the 1920s, Guy and Nelson Kelly, in addition to farming, ran the Halcottville Electric Lighting Company. Although only a few houses remain today, the small hamlet of Kelly Corners (located between Margaretville and Halcottsville along Route 30) was also named for the Kelly family and was once a bustling community with a post office, general store, blacksmith, two creameries and a railroad depot along the Ulster & Delaware line.

Today, the fully restored Round Barn is home to the popular Pakatakan Farmers Market, which features local farmers, craftsmen and artists selling their wares. Customers can buy locally grown or made produce, breads, jelly and jam, maple syrup, meats, fish, and cheeses, as well as flowers, plants, arts and crafts, handmade soaps and much more. The market is open Saturdays from mid-May to October.
Copyright © All Rights Reserved 2018 Matthew Jarnich
Powered by ZENFOLIO User Agreement
Cancel
Continue