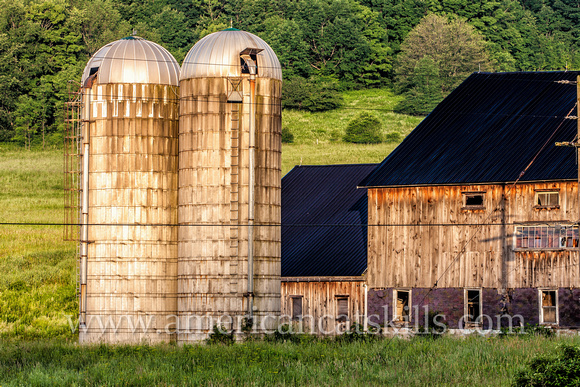 Delaware County is home to a thriving agricultural industry that dates back over 200 years. Many area farms are home to picturesque barns of all types and distinguishing characteristics, some still active while others are in a decades-long state of neglect. Whatever their taste, in today’s fast paced world, these barns have perhaps taken on unintended meaning well beyond their original functional use, representing the slower era of yesteryear while continuing as iconic symbols of this country’s agricultural roots. The farm pictured here is characteristic of the pastoral beauty that can be found throughout Delaware County, New York.

“Margaretville, the metropolis of Middletown, is located on the East Branch of the Delaware, at the foot of Mount Pakatakan, a lofty verdure crowned peak of the Catskills, and near the central part of the town. It was named in honor of the daughter of Governor Morgan Lewis, who at one time owned this tract of land by inheritance from her mother . . . The popularity of Margaretville as a summer resort is each year increasing. Its clear mountain springs from which is received its water supply, its improved roads and shaded drives, its miles of stone walk, its clean streets and fine mountain scenery attract all who visit the place. During the summer months the population is largely increased by city people. Amount those who have built cottages here is the artist, Mr. Henry Mosler, whose paintings are noted both in Europe and America.” – David Murray. Delaware County, New York, History of the Century 1797-1897. Delhi, NY: William Clark, 1898. Page 569.
Copyright © All Rights Reserved 2018 Matthew Jarnich
Powered by ZENFOLIO User Agreement
Cancel
Continue