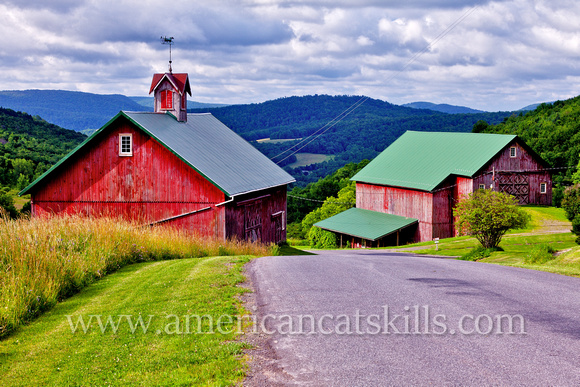 Delaware County is home to a thriving agricultural industry that dates back over 200 years. Many area farms are home to picturesque barns of all types and distinguishing characteristics, some still active while others are in a decades-long state of neglect. Whatever their style, in today’s fast paced world, these barns have perhaps taken on unintended meaning well beyond their original functional use, representing the slower era of yesteryear while continuing as iconic symbols of this country’s agricultural roots. The farm pictured here is characteristic of the pastoral beauty that can be found throughout Delaware County, New York.

“The topography of the town [Walton] may be described as a mixture of mountain, hill and valley. Through the southeastern portion runs the West Branch of the Delaware River. Along that portion of the river in the northern part of the town are wide, fertile flats. Below the village the flats become narrower, and the mountains approach almost to the river banks. That portion of the town north of the river is traversed by the East, West and Third brooks, which empty into the river through the plains upon which the village of Walton is now situated. The valleys of these various streams from some of the best farming lands in the county.” – David Murray. Delaware County, New York. History of the Century 1797-1897. Delhi, NY: William Clark, 1898. Page 569.
Copyright © All Rights Reserved 2018 Matthew Jarnich
Powered by ZENFOLIO User Agreement
Cancel
Continue