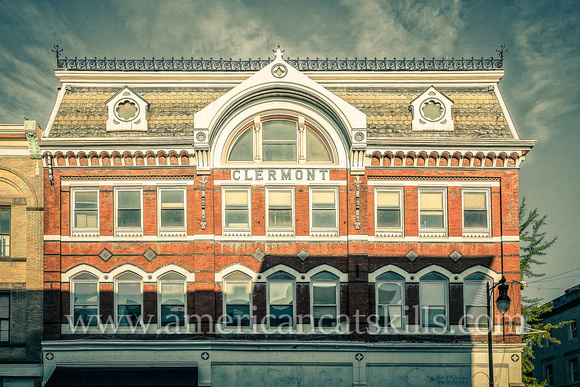 The Clermont Building located in the heart of the historic Stockade District in Kingston was constructed in the late 19th century. As part of the application form for the Stockade District’s inclusion National Register of Historic Places the Clermont building was described as having a “slate mansard roof” and “the large structure has the original metal roof cresting, which has been lost on many buildings of this era. The third floor has 20-24 foot ceilings with two painted murals of unknown artistry or date depicting David and Goliath.” The historic Stockade District is an eight block area bounded by North Front Street to the north, Main Street to the south, Green Street to the west and Clinton Avenue to the east. The streets are laid out today just as they were in 1658 when the village was formed. The district contains eight 17th century stone houses, another dozen buildings from the 18th and early 19th centuries, plus many other architecturally appealing buildings.
Copyright © All Rights Reserved 2016 Matthew Jarnich
Powered by ZENFOLIO User Agreement
Cancel
Continue