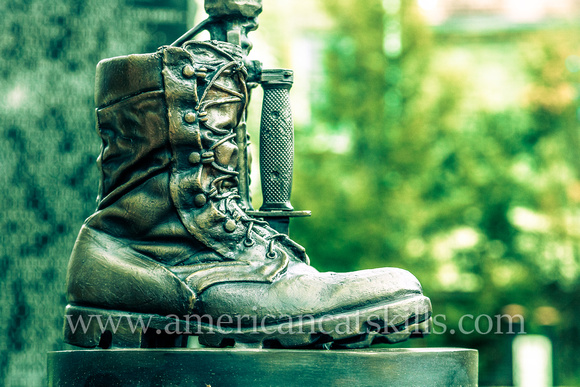 The Ulster County War Memorial, located in front of the Ulster County Office Building in uptown Kingston, pays testament to the 1,307 Ulster County citizens that have lost their lives defending our country. In the center of the monument stands a time honored military sculpture known as the Battle Cross, consisting of a soldier’s combat boots, their bayonet and inverted weapon stuck in the ground, dog tags hanging off the weapon and helmet resting on top of the stock of the weapon. It is meant to show honor and respect at the battle site. Surrounding the Battle Cross are five 7-foot high polished black granite slabs that are engraved with the names of those soldiers who have been lost. The slabs are positioned in the shape of a pentagon, representing the five branches of the military – Army, Navy, Air Force, Marine Corps and Coast Guard. The memorial was dedicated in 2015.
Copyright © All Rights Reserved 2016 Matthew Jarnich
Powered by ZENFOLIO User Agreement
Cancel
Continue