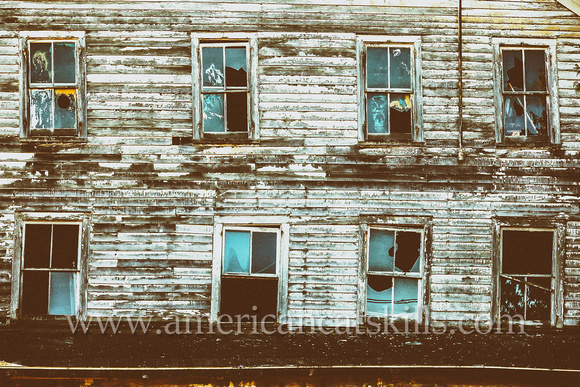 The Cold Spring House was built in the late 1890s in the grand hotel fashion of the day. It was the first Jewish hotel in the village of Tannersville and had room for over 200 guests. In separate 1902 and 1904 advertisements, Mr. Leopold Bieber, owner and operator, advertised the resort’s numerous amenities including shade trees, lawn tennis, croquet, Kosher, Hungarian and German cuisine, classical concerts, a dance hall, and a children’s parlor. In addition, the resort grew their own vegetables and provided fresh milk from their own cows. The hotel took its name from the nearby spring, which provided pure refreshing mountain water for all their guests. The hotel was reachable from New York City by rail in only 4 hours and by combination of boat and rail in only 6 hours.

Unfortunately, the Cold Spring House has fallen into complete decay having not been used for over 50 years. It is only a matter of time before the historic hotel falls down. On a recent visit I ran in to a man who claimed to be the owner and was hoping to sell it (and the adjacent motel style apartments), and as I was listening I couldn’t help but notice that several horses were now boarded in what had been the kitchen. Despite its current appearance, it is a popular location with photographers as the Cold Spring’s brooding, larger-than-life appearance present a hint of the area’s once-great boarding house era.
Copyright © All Rights Reserved 2016 Matthew Jarnich
Powered by ZENFOLIO User Agreement
Cancel
Continue