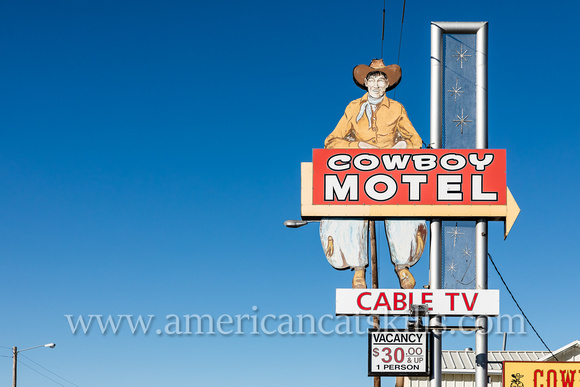 The Cowboy Motel is located along historic Route 66 (East Amarillo Boulevard) in the unofficial capital of the Texas panhandle at the city of Amarillo. The vintage sign pays testament to a bygone era when motor courts ruled the accommodations along the east-west travel on Route 66 from Illinois to California. A 1956 advertisement highlighted the motel’s “everything furnished, air conditioned. Private bath. Lawn. Automatic Maytag.” Other Amarillo motor courts of the era included the Route 66 Inn, the Palo Duro Motel and the Estess Motel. The classic cowboy depicted in the sign wears his baggy pants, with a long sleeve shirt, and cowboy boots with his bandana and hat. The sign certainly attracts the passerby, enticing them to spend the night. At $30 a night (in 2019) the Cowboy Motel, like its vintage sign, seems to be offering a throwback from its heyday.
Copyright © All Rights Reserved 2020 Matthew Jarnich.
Powered by ZENFOLIO User Agreement
Cancel
Continue