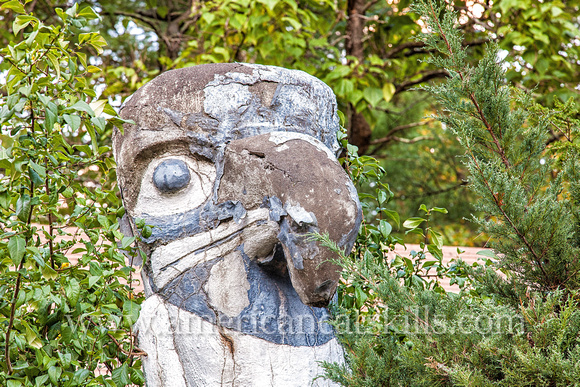 Emile Brunel (1874-1944) was a noted artist, painter, filmmaker and photographer. Brunel worked as a photojournalist for the New York Times Magazine and earned a certain degree of fame as a portrait photographer. In 1910 he founded the New York Institute of Photography (NYIP), which continues to train photographers today. Brunel would also develop a one-hour film development process, a process unique and ahead of its time. In 1918 Brunel began operating a successful Catskills resort called Chalet Indien in Boiceville. In 1918 Brunel also began work as a sculptor, creating a series of works between 1918 and 1944 that can still be seen today.

The Emile Brunel Studio and Sculpture Garden, also known as Emile Brunel Park, is situated in Boiceville on 1.2 acres of what was Brunel’s Chalet Indien resort property. After Brunel’s death in 1944, and with the construction of Route 28 through the hotel property in 1947, the hotel closed and the sculptures were moved to their current location and much of the remaining property sold. Brunel’s wife and later his daughter would operate a trading post and museum on the property until the 1980s.

Brunel Park contains his studio, three large scale sculptures, two totem poles and several small scale sculptures. The Emile Brunel Studio and Sculpture Garden is listed on the National Register of Historic Places as “an unusual and unique regional collection of folk art dating from the early twentieth century” and “is a rare surviving example of roadside art and architecture in the upper Hudson Valley.” (1)

The 30 foot, hand carved, wooden totem pole (seen here) was erected in 1933 by Emile Brunel, who stated that each carving represented a different event in his own life. From bottom to top, the totem pole includes a donkey, an Indian chief, a fish, an Eagle and two smiling faces.