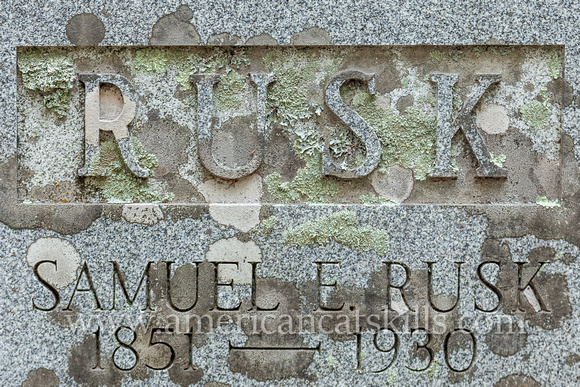 Samuel Rusk (1851-1930) is closely associated with the history of the northern Catskills. He was the grandson of Aaron Haines (1802-1883), who owned the first deed of land in the Haines Falls area and operated a popular boarding house. Rusk assisted Princeton geology professor Arnold Henry Guyot as he surveyed the Catskills, a survey that determined that Slide Mountain was the tallest mountain in the Catskills (previously recognized as Kaaterskill High Peak), set “down in print a system of names for all summits of any importance in the Catskills”* and expanded the region commonly known as the Catskills. In 1879 Rusk published the popular tourist guide titled An Illustrated Guide to the Catskill Mountains. In 1884 he built the fashionable Lox-Hurst boarding house in Haines Falls, which accommodated 40 people and was well known for its pure spring water. Lox-Hurst was located at the site of today’s Mountain Top Historical Society but unfortunately burned down in the mid 1990s. In 1905 Rusk built the opulent Claremont boarding house, which accommodated 75 people.

In 1907 Rusk constructed the Haines Falls post office and served as its postmaster for many years. He, along with his brother John Rusk, was a prominent landscape photographer and operated Rusk’s FotoFactory, a well known portrait studio in Haines Falls. He published a popular series of postcards from his photographs. In 1911 the partnership of Rusk & Andrews published a short photo book titled The Scenic Catskills, featuring some great views in the northern Catskills. And in 1912 Rusk & Andrews constructed the Wauwanda Theater in Haines Falls, once the largest theater in the Catskills.

Samuel Rusk was a prominent citizen who contributed in many ways to the Catskills community. The 3,680 foot Rusk Mountain, the 20th highest mountain in the Catskills, is named in his honor.