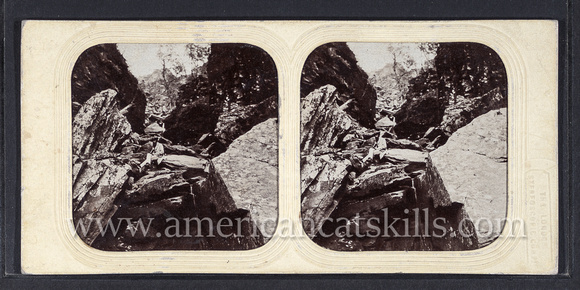 #53
Plauterkill Gap, Catskill Mountains.
“This wild and almost untrodden spot is one of the most rugged scenes in the Catskill Mountains. By a strange and sudden convulsion of nature, the solid mountains has been cleft, as it were, in twain, the stupendous masses which have fallen from its sides filling the intermediate chasm with vast piles of solid blocks, heaped one upon another in grand confusion. Stretching out far beyond, an extensive area is covered with these gigantic fragments and as one gazes on them, strewn far and wide, he is prone to think that nature dissatisfied with a portion of her handiwork, and disdaining the mountains she had once reared, had, in momentary anger, undone her work and scattered the huge mountains in fragments around. From between the fallen ruins a solitary tree will raise its head, the almost leafless branches partaking of the desolation around.

Crags, knolls, and mounds confusedly hurled
The fragments of an earlier world.”–Scott.