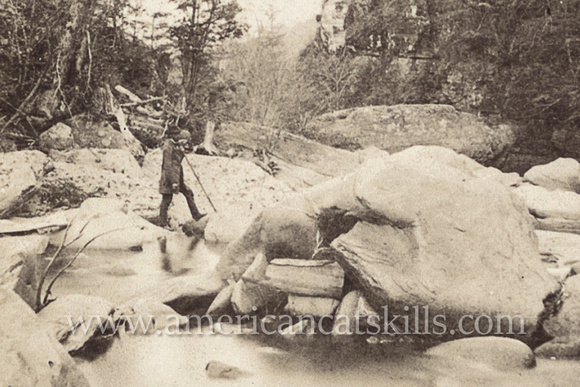 “The Kautsberg or Catskill mountains have always been a region full of fable. The Indians considered them the abode of spirits, who influenced the weather, spreading sunshine or clouds over the landscape and sending good or bad hunting seasons. They were ruled by an old squaw spirit, said to be their mother. She dwelt on the highest peak of the Catskills, and had charge of the doors of day and night, to open and shut them at the proper hour. She hung up the new moon in the skies, and cut up the old ones into stars. In times of drought, if properly propitiated, she would spin light summer clouds out of cobwebs and morning dew, and send them off from the crest of the mountain, flake after flake, like flakes of carded cotton, to float in the air until dissolved by the heat of the sun, they would fall in gentle showers, causing the grass to spring, the fruits to ripen, and the corn to grow an inch an hour. If displeased, however, she would brew up clouds black as ink sitting in the midst of them like a bottle-bellied spider in the midst of its web; and when this cloud broke, woe betide the valleys.” Notes to the “The Sketch Book,” by Washington Irving.