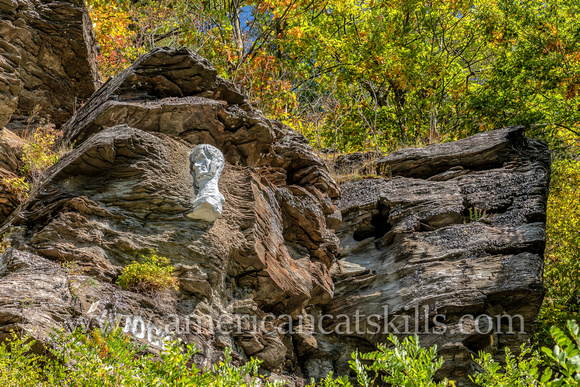 The sculpture seen in this photograph represents Zadock Pratt (1790-1871), the namesake of Prattsville and Pratt Rock Park, and a man of many talents. The son of a tanner who had moved to Greene County in 1802, Pratt began his career as a humble saddler and harness maker but went on to found one of the largest and most prosperous leather tanneries in the world in the Catskills, thereby founding the hamlet of Prattsville. In 1814 Pratt enlisted in the US Army and served during the war of 1812 as a cavalry sergeant under Captain Stone. Pratt also served in the New York State Militia for many years, eventually rising to Captain in the 5th Regiment of New York state artillery and was then promoted to the rank of Colonel, leading the 116th Infantry Regiment. Pratt held “numerous local, state and national elected offices, including Justice of the Peace (Town of Windham, 1824), member of the New York State Senate (1830), and Presidential Elector (1836 and 1852).” In 1843 he founded the Prattsville Bank, which operated until 1852, and in 1848 he received an honorary degree from Union College. Being well regarded in the community Zadock was elected twice to serve in the U.S. House of Representatives, first in 1836 and then again in 1842. Pratt died at 80 years of age in 1871 and is buried at the Benham Cemetery in Prattsville.
Copyright © All Rights Reserved 2021 Matthew Jarnich.
Powered by ZENFOLIO User Agreement
Cancel
Continue