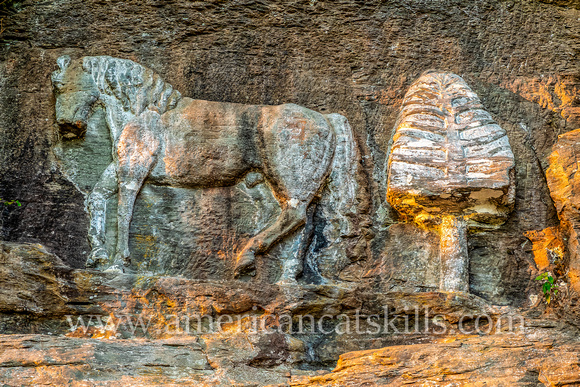 The horse represents Zadock Pratt’s loved of equines. It is reported that Pratt owned over a thousand horses in his lifetime. The horse depicted here was named Bob, and was ridden by Zadock Pratt while serving as a cavalry sergeant under the command of Captain Stone in 1814. The carving “stands out against the side of the cliff in bold relief. The image is 12 feet from head to tail, and more than six feet from flowing mane to front hoof. The left hind foot and the right front foot are lifted, as though the charger were about to swing into action. Gracefully arched neck and flowing mane and tail emphasize the beauty of the image.” (“Catskill Memorial to Hero of Revolution.” The Binghamton Press. July 8, 1830.)

At the beginning of the hike to Pratt Rock there is a stone monument that was erected in memory of Zadock Pratt’s horses and dogs, including his beloved horse Bob from the War of 1812. The monument inscription reads “Of over one thousand horses owned and worn out in service of Z. Pratt, the following were favorites . . . Bob, a sorrel, aged twenty-four years; Bogue, a bay, aged eighteen years; Prince, a gray, aged thirty years . . . Carlo, a scotch terrier and Newfoundland, aged twelve years; Rough, an Irish Canadian mastiff, aged eleven years; Mingo, a half English terrier, aged ten years.”
Copyright © All Rights Reserved 2021 Matthew Jarnich.
Powered by ZENFOLIO User Agreement
Cancel
Continue