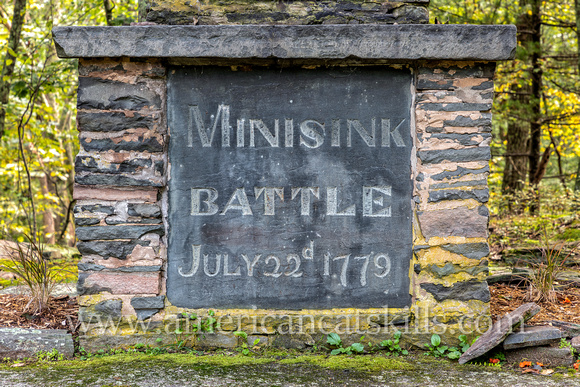 The Battle of Minisink Ford took place during the American Revolution on July 22, 1779 between British Loyalists and their Native American supporters, led by Mohawk Chieftain Joseph Brant, versus approximately 120 American militiamen from New York and New Jersey, led by Colonel John Hathorn. In response to Brant’s attack two days prior at the frontier settlement at Peenpack (Point Jervis), American militia sought to intercept Brant’s escape up the Delaware Valley, catching up with him and his forces at Minisink Ford.

With the American militia preparing to ambush Brant as he prepared to cross the Delaware River into Lackawaxen, and with Colonel Hathorn having split his forces into a group of skirmishers and two main units, an accidental rifle discharge from a militiamen unfortunately alerted Brant. Upon his discovery, Brant responded quickly and forcefully, attacking the American militia before they were able to fully deploy, splitting the American forces. One group of the Americans retreated to the top of the hill overlooking the river to regroup and regain their strategic advantage. Unfortunately, only about 50 of the original group of 120 American militiamen were left, the separated forces having dispersed or having been killed or wounded. Brant outflanked the Americans and broke through the new small defensive square of the Americans. The Americans were routed, with 47 militiamen killed. Brant lost approximately seven men. It was a decisive British victory.

The battle monument, made of native bluestone and capped with a rounded glacier boulder, was dedicated in 1879 on the centennial of the battle. The monument measures 11 feet high and 5 feet wide at its base. Over 1,000 people attended the 1879 centennial dedication ceremony that included music, prayers and speeches from local dignitaries and descendants of those who were killed in the battle. Over 12,000 people attended similar cemeteries at Goshen, N.Y., where many of the remains of soldiers killed in the battle are buried. The Minisink monument is located on the site of the militia’s “last stand” of the battle.
Copyright © All Rights Reserved 2021. Matthew Jarnich.
Powered by ZENFOLIO User Agreement
Cancel
Continue