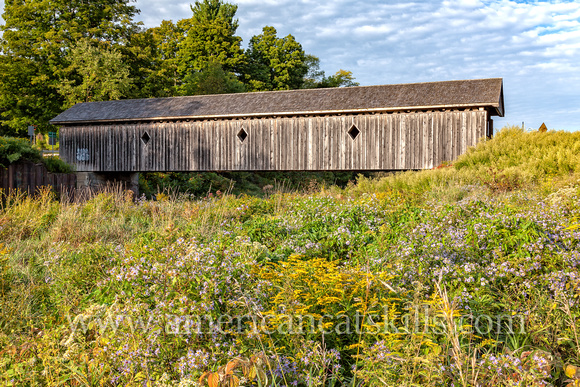 The historic Fitch’s Covered Bridge was constructed in 1870 by James Frazier and James Warren at a cost of $1,900. The bridge is a single span, one lane wide, constructed using native materials and is 106 feet long as it spans the West Branch of the Delaware River. The bridge was originally located on Kingston Street in Delhi but was moved in 1885 when the town decided to replace the covered bridge with a newer, more durable iron structure. Instead of destroying the relatively new bridge (constructed only 15 years prior), it was moved several miles upstream to its current location. The historic bridge was recently restored in 2001 at a cost of $425,000. Fitches Covered Bridge is listed on the National Register of Historic Places.

According to the Fitch family website, the bridge is named for Dr. Thomas Fitch (1774-1849) and his younger brother Dr. Cornelius Root Fitch (1783-1846). “Thomas bought a farm at the (site of the future) bridge on the river in 1803. When he left Delhi for Philadelphia in 1806, he sold the farm to Cornelius, who continued to practice medicine in Delhi for 33 years.”
Copyright © All Rights Reserved 2018 Matthew Jarnich.
Powered by ZENFOLIO User Agreement
Cancel
Continue