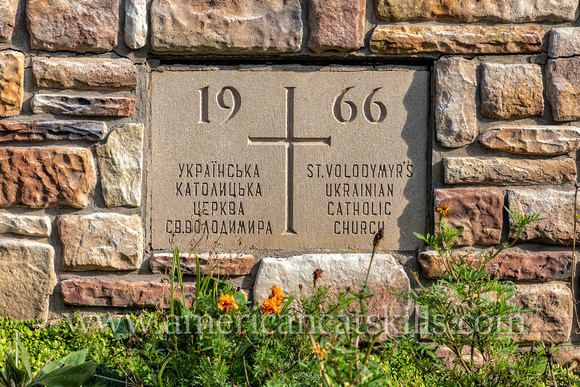 The St. Volodymyr Ukrainian Catholic Church is located only a few miles from the Delaware River at the hamlet of Glen Spey in Sullivan County, New York. The church was consecrated on July 30, 1967 by His Excellency the Most Rev. Joseph Schmondiuk, Bishop of Stamford, in order to meet the religious needs of the growing population of Ukrainians living in the area. The first pastor at the church was Rev. Stephan Kieparchuk.

St. Volodymyr Church was designed by architect Apollinaire Osadca (1916-1997) and constructed by master builder George Kostiw. At its consecration, Osadca said the church was “built in the tradition of the wooden church architecture of the Ukrainian Carpathian Mountains . . . [and] even though it has the style features of the wooden Carpathian churches . . . it is not a copy of any one there.” Osadca, despite having designed many other buildings, described the construction of St. Volodymyr as a “labor of love.” Some of St. Volodymyr’s early congregants described the building as “the most beautiful Ukrainian wooden church in the free world.”
Copyright © All Rights Reserved 2021. Matthew Jarnich.
Powered by ZENFOLIO User Agreement
Cancel
Continue