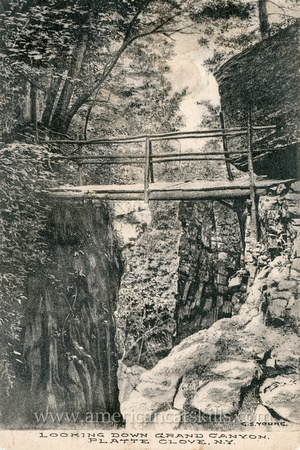 This vintage postcard shows the rustic wood bridge that crossed over the chasm at the Hell Hole in what was historically known as the Grand Canyon, but is today generally referred to as Platte Clove. The postcard was published by the nearby Grand Canyon House and its proprietors, I. J. & W. H. Young. The postmark on the reverse side shows that it was mailed in 1933.

Well-known photographer and guidebook author Richard Lionel De Lisser wrote of his 1894 trip through Platte Clove: “ A trip through the clove, following the bed of the stream, to West Saugerties, in Ulster County, is fully worth the exertion necessary to make it, and is full of interest to the lover of Nature in her barbaric state. There is nothing in the Catskills to equal it – of the kind. My trip was made with an assistance and a guide, with an axe to clear the way of fallen trees and other obstructions. Although not much over a mile, it took us from early morning till late in the evening to make the passage. In the descent, of over 2,000 feet, no less than eighteen large waterfalls are encountered and passed, which vary in height – from twenty-five up to many which are higher – some of them hundreds of feet. There are no paths or roads through; in fact there is little chance for any, the creek occupying about all the space between the mountains on either side.

After a visit to Black Chasm and the Plaaterkill Falls, the next point of interest is the Old Mill Falls, just below the bridge that crosses the stream on the Overlook Mountain road. Then comes Pomeroy Falls. Here the visitor will find a flight of steps that will take him to the foot of the ravine. From there, down the clove, he must do as I did – make the best of the natural opportunities afforded by the depth of the water in the creek, and the fallen trees and rocks in the bed.

I should judge that a foot-path could be made through the entire length of the clove, and at but little expense, that would make it passable for ladies and summer people in general. The place only needs to be known and mad passable, to take precedence over any other of the cloves in the Catskill region.

The next fall below Pomeroy is the Rainbow, the one below that is the Lower Rainbow, or Hell Hole Falls. The stream that enters the creek at this point comes from High Peak, passes under Hello Hole bridge, on the clove wagon road, and falls almost perpendicularly hundreds of feet, over huge rocks and high cliffs, into the wild stream below.

Green Falls comes next. A second view of this falls I have called “The Ghost,” as it suggested to me a Death-head wrapped in a winding-sheet. Looking to one side of the “Ghost,” you can find two other heads, one clearly defined.

Evergreen Falls is named from the quantities of green moss that covers its rocks, and comes next in order. Then comes Rocky Rapids, which is a wild and rather a dangerous spot, quite narrow and in which one is in as much danger from the rocks handing above as from the big boulders in the path.

Gray Rock is a beautiful falls, and would well repay a visit to the clove. The stream from Black Chasm enters the creek just below these falls.

In attempting to cross the stream here I fell in the creek, for about the twentieth time that day, but unfortunately, this time, having in one hand the camera and in the other the lens, and wishing to keep them dry, at any cost, I was obliged to remain as I had fallen, until relieved of them, while the water, which had found convenient passageway through my trousers, spurted out over my collar in playful jets. My guide set to laughing at this, and laughed so long and so hard that we had to sit down and wait for him to get through and afterward to recover from the fatigue caused thereby.