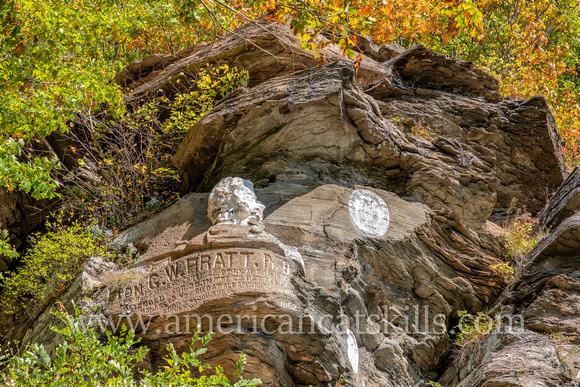 The sculpture seen in this photograph depicts Colonel George W. Pratt, son of Zadock Pratt. George Watson Pratt (1830-1862) was born in 1830 at Prattsville. Pratt was first educated at Prattsville, but completed his education in Germany, where he received a degree of Doctor of Philosophy. Upon graduation he traveled extensively in Egypt, Israel, Turkey and Russia. He returned to the United States in 1855, when he married Anna Tibbits and worked as a leather manufacturer in Kingston, New York. Pratt was elected to the New York State Senate in 1858 and 1859. Pratt served as Colonel of the 20th New York State Militia, also known as the Ulster Guard, during the Civil War. At the second battle of Manassas in Virginia on August 30, 1862 he was shot in the left shoulder and the spine. He died nearly two weeks later at the age of 32 on September 11, 1862 at Albany, New York. He is buried at Albany Rural Cemetery.

The carvings dedicated to George W. Pratt at Pratt Rock were one of the earliest Civil War monuments. The inscription reads: