Thomas Morris Longstreth, Author of The Catskills (Part 1 of 5)

The Catskills by T. Morris Longstreth is one of the best books ever written about that famous region. The travelogue follows the author as he journeys through the Catskill Mountains in 1918. Longstreth takes you to Overlook Mountain, Stony Clove, Phoenicia, Hunter, Slide Mountain, Kaaterskill Falls, the Ashokan Reservoir, Mount Utsayantha and many more places. Along the way Longstreth fishes the mountain streams, sleeps under the stars, lodges at local boarding houses and dairy farms, tramps the backroads, talks to the people and witnesses the many majesties of nature. The book has an easy flow, making the pages turn by effortlessly. Interspersed throughout the book are great pieces of advice which, taken by themselves, are worth the read. Here is the story of its author. 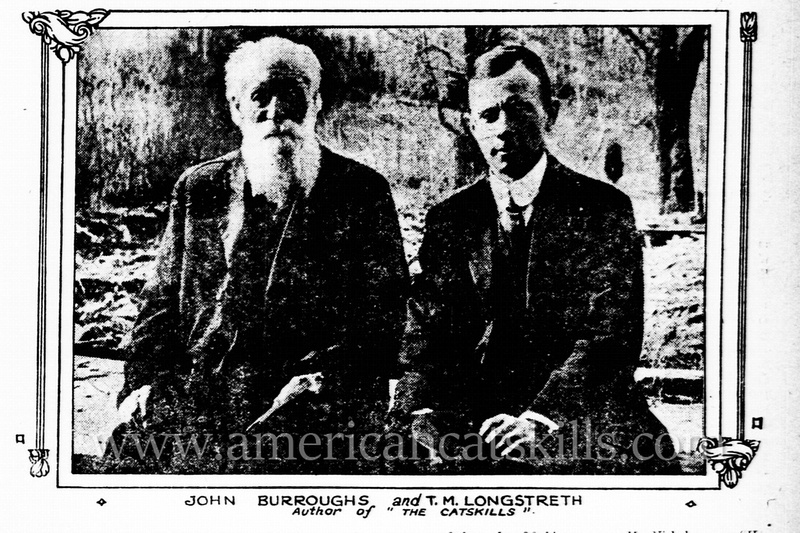 T. Morris Longstreth authored the 1918 classic "The Catskills," one of the best books ever written on that famous region.

Thomas Morris Longstreth was born “in the midst of a February blizzard” on February 17, 1886 at Philadelphia, Pennsylvania to the Quaker family of Benjamin Taylor Longstreth (1849-1912) and Frances Haldeman. Benjamin and Frances married the year prior on April 29, 1885. When Thomas was only two years old, his mother Frances died on March 24, 1888 while giving birth to his brother Frances H. Longstreth, who also died that same day. His father Benjamin would remarry to Sara Gibson Haldeman, the sister of his first wife, on November 14, 1889. Benjamin and Sara would have three children together, Walter Wood (b. 1890), Charles Haldeman (b. 1893) and Richard (b. 1903).

Longstreth’s father, Benjamin Taylor Longstreth, was born on August 16, 1849 at “Locust Grove” in Springfield, Pennsylvania. Like his father before him, and his son after him, Benjamin attended Haverford College, entering the school in 1865. However, Benjamin did not graduate, leaving at the close of his sophomore year. Benjamin’s post-college professions were as an iron manufacturer and merchant. After leaving Haverford, Benjamin joined the iron firm of Morris, Wheeler, & Co., where his uncle, Israel Morris, was the senior partner. He became a member of the Firm on January 1, 1892. Benjamin served the community well as a member of the Board of Education of Philadelphia. Benjamin died on November 11, 1912 and is buried at the Friends Southwestern Burial Ground in Upper Darby, Pennsylvania.

Longstreth’s grandfather, William Collins Longstreth (1821-1881), was born on March 12, 1821 in Philadelphia, Pennsylvania. William was well educated from an early age: “He began the study of Latin at six years of age and read Virgil at eight. When twelve years old he entered Haverford School.”[1] William entered Haverford College with the sophomore class of 1834 and graduated in 1837. He was one of the first graduates of the college, which was established only several years prior in 1833. William’s post-college professions included being a Farmer; Treasurer of the Elmira & Williamsport Railroad Company; Vice President of the Provident Life and Trust Company in Philadelphia for 15 years; and Manager of Haverford College from 1864-1881. William was also influential in the community, having founded the Greenway Union Sabbath School in 1858 in order “to teach and nurture the children of Southwest Philadelphia” as well as starting “a Sunday afternoon preaching service, and invited talented preachers from Baptist, Episcopal, Presbyterian and other churches to proclaim the good news of Jesus Christ.”[2] Through mergers and name changes, the school and church continue to exist today.

Tracing Thomas’ lineage back even further, there is Isaac Longstreth (1742-1817), his great-great grandfather, who served as a Captain in the American Revolution and commanded a company at the battle of Crooked Billet (present-day Hatboro, Pennsylvania) that took place on May 1, 1778. Prior to the battle the Pennsylvania militia unit under the command of Brigadier General John Lacey (1755-1814) had been tasked by General Washington to patrol the Pennsylvania countryside in order to cut off the resupply of British troops headquartered in Philadelphia. On the morning of May 1st, the British under the command of Major John Graves Simcoe attacked Lacey’s Pennsylvania militia unit at Crooked Billet. After being surprised in camp, the American troops quickly retreated to nearby woods to the north, skirmishing with British troops along the way. The British eventually broke off the attack and withdrew to their base in Philadelphia. The Americans suffered 26 killed, 58 missing and 8 wounded as well as the loss of numerous supplies and wagons. The battle is particularly noted for British atrocities, including the murder of prisoners-of-war and setting fire to the American wounded soldiers. Although the battle is officially recognized as a British victory, given the level of surprise and being massively outnumbered, the defeat could have been much worse if not for the quick actions taken by Brigadier General Lacey and his troops. At Hatboro, Pennsylvania Isaac Longstreth’s name is inscribed upon the historic monument that commemorates the battle. Erected in 1861 by the Hatborough Monument Association, one of the inscriptions on the monument reads “The Patriots of 1776 achieved our independence. Their successors established it in 1812. We are now struggling for its perpetuation in 1861. The Union must and shall be preserved.”

Longstreth’s brother (via Sara), Richard Longstreth, was born on June 25, 1903. As with his grandfather, father and brother, Richard also attended Haverford College. “He captained the soccer team during his senior year, in 1925, and was named for the All-American team. In addition he was a member of the football squad and pitched for the baseball team during four seasons. He was vice president of the Founders’ Club and a member of the Glee Club and Athletic Cabinet. The son of Mrs. Sarah G. Longstreth, he married Mary Comfort shortly after his graduation from college, and moved to Detroit, where he had been engaged in the investment brokerage business. Besides his wife and mother, he is survived by one brother, T. Morris Longstreth, a writer.”[3] Richard Longstreth died in 1928 at his home in Detroit, Michigan. He was the son-in-law of Dr. William W. Comfort, the president of Haverford College.

Longstreth’s brother (via Sara), Walter Wood Longstreth, was born on October 6, 1890. Like his brother and many others in the family he attended Westtown Boarding School and then Haverford College. While at Haverford Walter was on the class cricket team, the class track team, and was an associate manager for the Class Record. He graduated with a Bachelor of Science degree in 1912.

Growing up, Longstreth had much access to his extended family. “I enjoyed the adjacent large estate of my grandmother Longstreth, with farm, orchard, horses, and nearly thirty cousins.”[4]

Early in life T. Morris Longstreth developed his lust for nature and writing. “I got my second wind at thirteen, when Back Log Camp introduced me to the Adirondacks and the wilderness which I loved at first smell. Thanks to its founder, Thomas K. Brown, I shifted to Westtown Boarding School, where I discovered friendship, first love, poetry, and the joys of freedom.”[5]

Thomas Kite Brown (1851-1929) played an influential role in Longstreth’s life. Brown was a “well-loved teacher and principal at Westtown School, familiarly known to hundreds of his pupils as “Master Thomas.”[6] Like Longstreth, Brown had attended the Westtown School himself as a student. Brown would return to teach there from 1875 to 1912, serving as the head of the mathematics department for 35 years, and serving as its principal from 1912 to 1917. Longstreth dedicated one of his earliest books, The Adirondacks, written in 1917, to Brown as “Our One-time Master, Our Oft-Time Counselor, Our All-time Friend.”

When Brown announced his resignation from Westtown School in 1917, it was a great loss for the school. With his retirement, “Westtown loses practically a godfather . . . the ideals and policies of the school have been his earnest concern for generations . . . There are hundreds of prominent “Quakers” in the vicinity of Philadelphia who will probably still believe that if John, Jr., can’t have the same mathematical training that John himself had, the result will be little short of disastrous. “T.K.” always had the reputation of getting more work out of a pupil to the square inch than any teacher in the history of the school. And the funny part of it was he always did it unconsciously – to the pupil. His quaint anecdotes and absent-minded antics served to infuse a good-natured willingness to do everything possible for Master Thomas.”[7]

Brown was also the founder and owner of the “Back Log Camp”, located on the banks of Indian Lake in the Adirondacks, which provided a treasured country destination for a summer retreat to Longstreth and many other Quaker families. The Back Log Camp, which Longstreth spoke so highly of, originated in 1896 when Thomas Brown established a camp on Agnes Island, near Hulett’s Landing on Lake George. In 1898 the camp moved the camp to Thirteenth Lake. In 1900 the camp moved again to North Bay on Raquette Lake, where it remained until 1910. These first camps were all located on state land. Given the tightening restrictions on such state land use, Brown and the camp then decided to purchase their own property. In 1911 the Backlog Camp moved to its permanent destination with the purchase from a lumber company of 125 acres on the Jessup River arm of Indian Lake. The camp expanded to include greater comforts.

Although it was for many years open to the public, the camp officially closed to outside visitors in February 1969 and is now used exclusively by family descendents of Thomas Brown. Upon its closing the Back Log Camp sent letters to many of its former campers:

For many years the family has sent out a greeting of bet wishes to old campers. This year, 1969, however, our greeting must also be a goodbye, for this past summer was Back Log Camp’s last season. For some time, now, we have been concerned at our inability to maintain the traditional quality of Back Log services and have decided to close camp.

For many of us in the Back Log family the running of Camp has been an important part of our lives. We shall miss the joys and the trials our joint enterprise, but most especially we shall miss you, the many guests who made Back Log a very special place.