Harvey and Edgar Kinch, better known as the Kinch Brothers, operated a successful photo studio in Walton and Hancock for over 40 years. They were both well-respected members of the Delaware County community.

Harvey Kinch was born on November 29, 1868 to Nathan and Martha (Rush) Kinch. Nathan was “one of the best known residents of Walton . . . [he] was born near Youngs, May 26, 1843. He was married in 1865 to Miss Martha Rush [daughter of James Rush and Hannah (Smith) Rush]. They had resided for several years in Rockland, where Mr. Kinch was a carpenter. They came to Walton in 1873 and Mr. Kinch started in the furniture and undertaking business in the building occupied of recent years by Charles W. Shepard on Delaware street. While in this business, Mr. Kinch patented a mitering machine, from which he reaped a comfortable fortune. He sold out to E. P. Berray in 1882 and then built up a large insurance business in the Kinch block on Delaware street. Mr. Kinch was town overseer of the poor for the last four years of his life, resigning a few weeks ago, owing to ill health. He made one of the best overseers the town has had, conducting the office at a great saving to the taxpayers, and with utmost kindness to the unfortunate. He also served as village trustee some years ago. He was a man of exceptional business judgment and his opinion on business propositions was invariably sound. Mr. Kinch enlisted in the 101st Regiment, N.Y. volunteers, in 1861, but he was overtaken with fever on his way to the front and did not see active service on the field during the Civil War. He was a member of the M. E. Church and was active in church affairs. . . Besides his widow, Mr. Kinch is survived by three sons: Harvey, Edgar and Irving, all of Walton.” (Walton Reporter. August 14, 1915.) Nathan died at age 72 on August 10, 1915 at his residence a week after having suffered a stroke. He is buried at the Walton Cemetery. 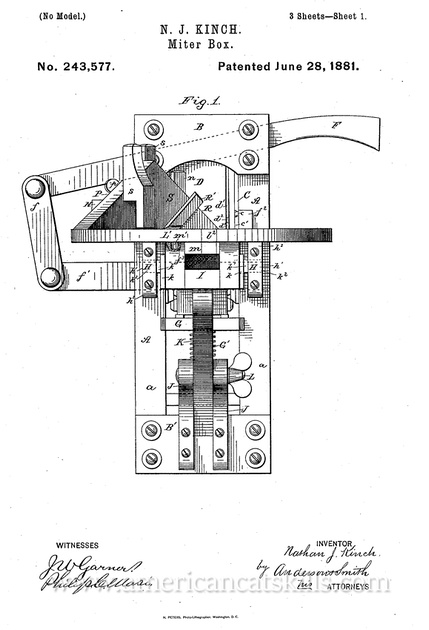 Nathan Kinch "Miter Box" PatentNathan Kinch was the father of Harvey and Edgar Kinch, prominent photographers in Walton and Hancock for over 40 years. Nathan received a patent for a "Miter Box" in 1881.

Harvey, along with his younger brother Edgar, operated a photo studio at Walton (on Delaware Street) and Hancock for nearly 40 years. Harvey had gone to school through the 8th grade, which was not uncommon for the era and the region. The 1892 New York State census listed Harvey with a profession of “Artist,” as photographers were often referred to at the time. Harvey founded the studio around 1894-1895, possibly buying Frank L. Sprague’s studio. In 1900 he formed the partnership with his brother, now operating under the name Kinch Bros. At the time of the partnership they also purchased the gallery of O. T. Morgan at Delhi. The Hancock and Walton galleries, and for a time the Delhi gallery, were operated as branches, “one of the firm passing one or two days in each place as the necessities of the trade demands.” (Delaware Gazette. December 5, 1900.) The Kinch Brothers studio operated until 1935. 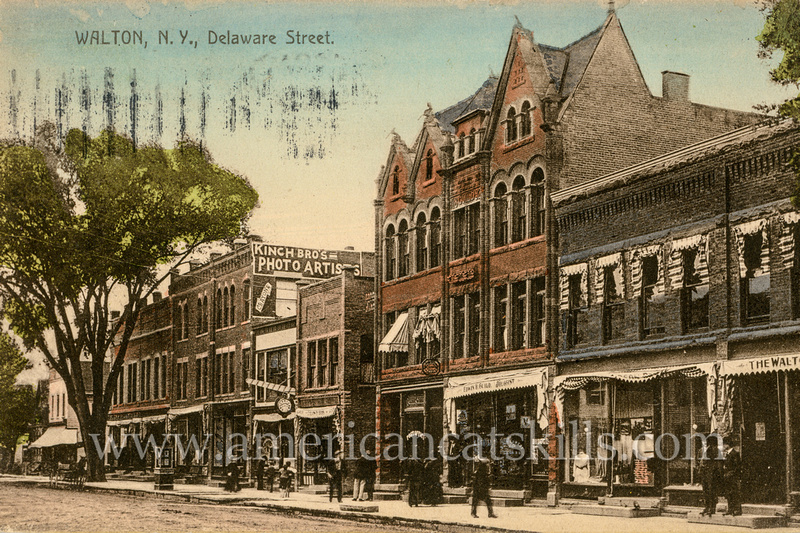 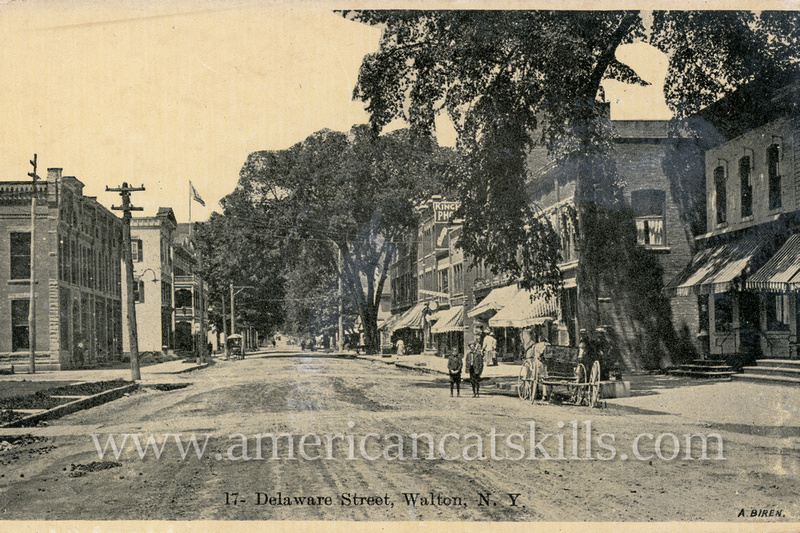 Vintage postcard of the buildings along Delaware Street in Walton, New York. The Kinch Brothers photo studio can be seen on the right-side, mid-way in the postcard. Harvey Kinch and his brother Edgar Kinch were popular photographers in Walton for over 40 years from approximately 1895 to 1939. The postcard was published by George Seeley & Co in Walton NY. The postcard was never mailed.

The Kinch Brothers Studio can be sign on the right side of the picture.

Harvey first married at age 27 to Evelyn Carmen, who was born and raised in the town of Andes. She was born on May 1, 1867. After her marriage in 1895 to Harvey she moved to Walton where she was a member of the First Congregational church of Walton and participated in the Sedna Club. She passed away at the age of 66 on January 29, 1934 after a short illness. Funeral services were held at Holmes funeral home as officiated by Reverend Grant Robinson. Evelyn is buried at the Walton Cemetery.

The next year Harvey remarried to Mary Haverly in Walton on October 21, 1935. Mary was born on October 10, 1879 in Schoharie to Alonzo and Hattie (Silliman) Haverly. She had lived in Walton for 50 years and was a member of Walton Methodist Church and Woman’s Christian Temperance Union. Mary (Haverly) Kinch died at the age of 85 on December 16, 1964 after a five-month illness. Funeral services were officiated by Reverend Henry G. Lincoln at the Lyon Brothers Chapel. She is buried at Walton Cemetery.

Harvey J. Kinch1892 New York State census snapshot of the Kinch family, including Harvey J. Kinch, a well-known photographer who operated a studio in Walton and Hancock for over 40 years.

1892 New York State Census which shows Harvey Kinch with a profession of "Artist."

Harvey retired from the photography business in 1935 after a devastating fire in Walton that destroyed the studio. The fire caused over $150,000 in damages in Walton and leveled three business blocks along Delaware Street, destroying several stores including Cetta Brothers Shoe store, the Myron DuBoise Jewelry store, the S. H. Osterhout Paint and Paper store, and the New York store. “The fire was said to have been caused by an explosion due to gas fumes in the cellar of a block owned by Joseph and Frank Cetta. Gas from broken service station tanks had seeped into water in Delaware street. Walton fire department, assisted by Sidney, Downsville, Deposit and Delhi fire companies, had the fire under control at 10:30 a.m. after three and one-half hour battle. Walton, just getting organized after its disastrous flood, which caused $100,000 damage in that village, presented a scene of disaster and business at a standstill.” (“Fire Sweeps Walton’s Business Section Tuesday.” Rural Times. July 12, 1935.)

Four months after the fire Edgar reopened the studio on his own, informing the local newspaper representative “that with his new up-to-the-minute outfit he now is in position to meet more satisfactorily the requirements of the general public.” (“Local and Personal.” The Hancock Herald. October 10, 1935.) Edgar operated the business as “Kinch Studio” until his passing four years later.

Edgar Heth Kinch, Harvey’s brother and business partner, was born on May 7, 1877. He married Emma Goodrich in 1900 at a service held at her parent’s residence. The wedding received lengthy treatment from the local newspaper as “a pretty June wedding.”

“The ceremony was performed by Rev. Robert Knapp of the M. E. Church, of which both families are members. One hundred and fifty guests were present.

The wedding march from Mendelssohn, was played by Miss Viva Goodrich, of Port Jervis, a cousin of the bride.

It was somewhat past the appointed hour when the bridal party descended the stairway. The ushers were Clarence Sherwood and George Carpenter; following them came the best man, Thomas Kingsbury, and the groom, then the maid of honor, Miss Florence Goodrich, of Port Jervis, and last the bride leaning on the arm of her father.

The rooms were beautifully decorated with daisies and evergreens. Ropes of evergreen entwined with daisies were festooned from the ceiling around the sides of the front parlor, and in the east corner an arbor of evergreens and daisies, banked with palms and flowers, denoted the charmed spot. A wedding bell of daisies was suspended from the center of the arbor. The stair railing was wound with evergreens and beautiful flowers were everywhere.

The ceremony was most impressive. The bride was given away by her father. The service was with a ring. After it was over her dear 500 friends showered the bride with kisses and wished the couple long life and happiness to their heart’s content.

An elegant collation was served during the evening. The wedding gifts, of which there was a profusion, where beautiful and many costly. Mr. and Mrs. Kinch took the night trail for their wedding trip. On their return their home will be Walton. The groom is one of the firm of Kinch Bros., photographers, and both are among Walton’s most esteemed people.” (“Kinch-Goodrich.” Tri-States Union. Port Jervis, NY. June 27, 1901.)

As per Edgar’s obituary “In early life he became interested in photography, and over 40 years ago, in partnership with his brother, Harvey, started a photographic studio in Walton. He has been active in portrait photography ever since then, having a studio in both Walton and Hancock. Quiet and unassuming, honest and industrious, Mr. Kinch was a man who had many friends. He was a member of the Walton fire department, the Masonic order and the Methodist church and was an honorary member of the Walton Kiwanis club. He is survived by one son, Carlton G. Kinch, of Stamford and a daughter, Mrs. Helen Craft at home and one brother, Harvey Kinch of Walton.” (Walton Reporter. September 22, 1939.) He died at the age of 62 of pernicious anemia in Binghamton on September 17, 1939. Funeral services were held at the Lyon Brothers chapel and officiated by Reverend Grant Robinson. Edgar Heth Kinch is buried at the Walton Cemetery.

Harvey Kinch died at the age of 90 on June 7, 1959 at Smith Hospital after having been sick with a heart condition since April. Funeral services were held in Walton at the Lyon Brothers Chapel and officiated by Reverend Henry G. Lincoln, pastor of the First Methodist Church in Walton. Harvey Kinch is buried at the Walton Cemetery. He was survived by his wife; his niece, Mrs. Helen Johnson; and his nephew, Carlton Kinch.