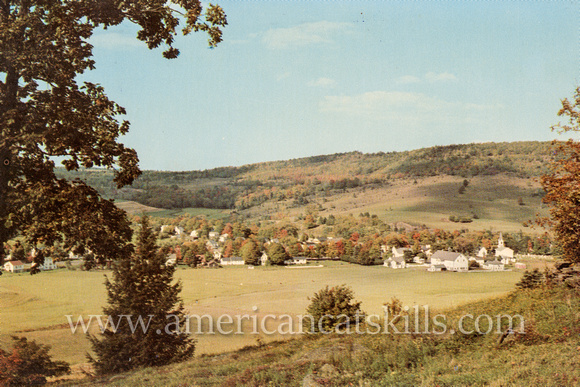 Stamford is home to 3,214-foot Mount Utsayantha which is open to the public for hiking, hang gliding, picnicking and camping. On the summit is a 60-foot tall fire tower that offers commanding 360-degree views. The tower was constructed in 1934 by the Civilian Conservation Corps. Legend, of which there are multiple, varying versions, has it that the mountain takes its name from an Indian princess, Utsayantha, daughter of Chief Ubiwachah, who tragically took her own life after the death of her child. She was reportedly buried on the mountain.

The alternative name for the postcard is “Greetings from Stamford, New York.” The postcard was published by famed photographer Bob Wyer. The postmark on the reverse side shows that it was mailed in 1983.
Copyright © All Rights Reserved, 2020. Matthew Jarnich.
Powered by ZENFOLIO User Agreement
Cancel
Continue