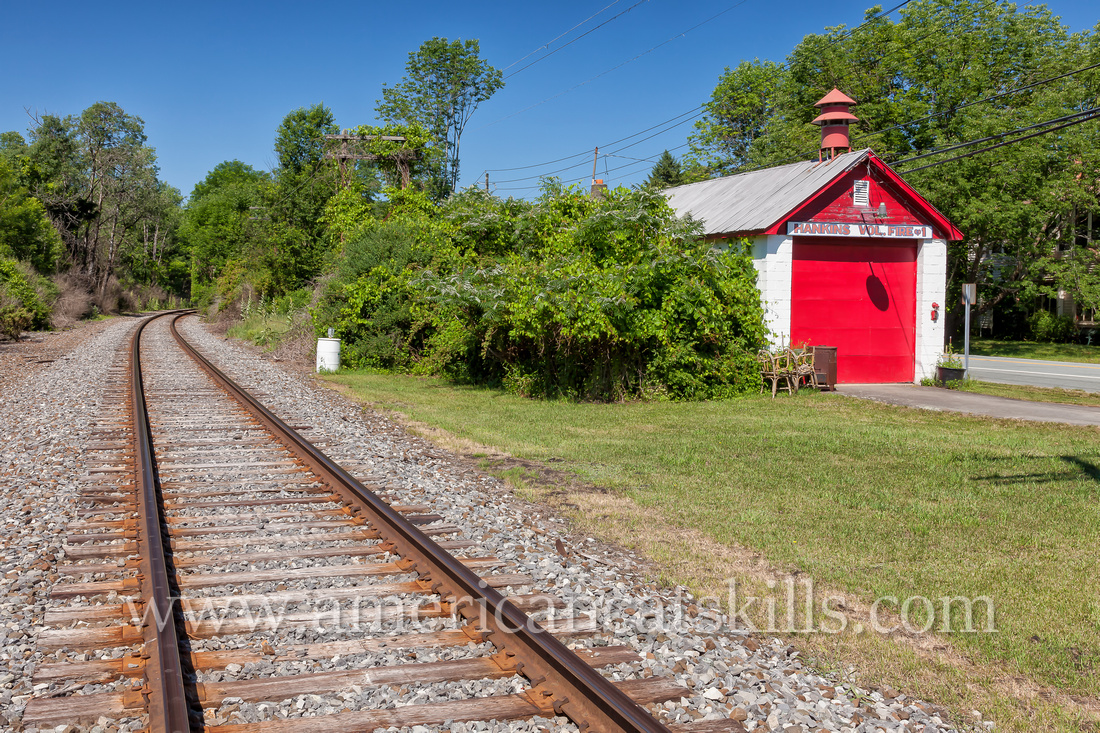 The hamlet of Hankins takes its name from John Hankins, who was descended from a soldier who served under General George Washington in the American Revolution, and was notably with the Continental Army when they crossed the Delaware. The historic sign located at the former Hankins fire department building provides additional background about the history of Hankins. “In 1834 John Hankins bought the land now called Hankins. He built the first store, blacksmith shop and sawmill – main industry lumbering. Was Justice of Peace and then Supervisor of the town. In 1851 Erie R. R. named it Hankins Station.” 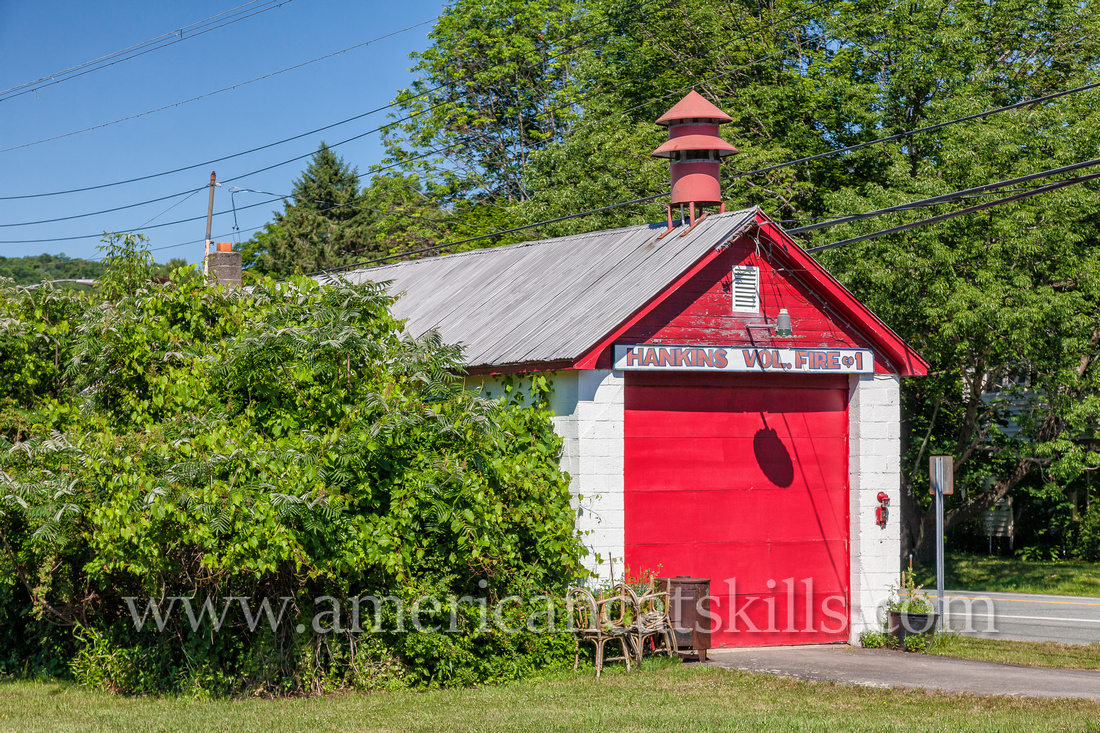 James Eldridge Quinlan in his History of Sullivan County, published in 1873, wrote in detail of John Hankins and the hamlet. “In 1821, Lakin sold his tract of land to Elizabeth Pierce, who, with her family, lived on it until about 1833, when she died. In 1834, John Hankins and Luther Appley bought the property, for which they paid $1,451. In 1835, Hankins bought an additional tract of Lucas Elmendorf, and in May, 1839, moved to Fremont with his family.

Previous to 1839, Mr. Hankins had resided in the town of Damascus, in the State of Pennsylvania, where he married Susan, a daughter of Moses Thomas, 3d. Then he removed to Fremont, he passed over the “State-road,” on the west side of the river. The New York and Erie Railroad Company had accomplished considerable in grading their road; but had suspended work in 1837. Mr. Hankins attempted to make a highway of their track, but after rendering about three miles passable, gave up the job.

For several years ingress and egress were difficult. To attend town-meeting and vote at the fall-elections, he was obliged to follow a line of marked trees to Liberty, or travel over the State-road to the bridge at Cochecton, and from thence to Liberty by the way of Bethel. Sometimes, however, when the water was low, he followed the beach of the river on horseback as far as Cochecton. As the ford near his residence was occasionally impracticable, he built a scow, and crossed the river in it; but when there was a flood, it was not safe to cross in any manner, and he was practically cut off from the outside world.

It was been represented that John Hankins was the pioneer setter at Hankins Depot;* [See French’s Gazetteer] yet, when he came, he found on his place an old frame-house, a saw-mill, and land which had been occupied and tilled many years. He also found a sycamore tree which was nine feet in diameter. The latter was hollow, and the cavity was larger than some bed-rooms. It is said that a man could ride into it astride of a horse. Until about 1865, this tree was used as a substitute for a smoke-house.

Mr. Hankins was a man of actions. Exclusive of those who lived in Pennsylvania, his only neighbors were at Long Eddy and Long pond; yet during the first year of his residence, he started a store and built a blacksmith-shop. He also built a handsome residence for his family, and in 1847, the second saw-mill erected on his land. He also became prominent as a local politician, and, notwithstanding his isolated position, was one of the first Justices of the Peace, and the second Supervisor of the town of Callicoon. He was elected to the latter office repeatedly, and at one time, in conjunction with Matthew Brown, controlled the Board of Supervisors.

Mr. Hankins did not live until the railroad was completed as far as Hankins creek. He was a man of forcible and energetic character – a warm friend and an ardent enemy – exalted in prosperity and depressed when his surroundings were unfavorable. In the summer of 1847, he suffered from a variety of small annoyances, and on the 17th of September was found dead on the road to Callicoon, about a quarter mile from his house, under circumstances which led to the belief that his life was cut short by his own hand.” (Quinlan, James Eldridge. History of Sullivan County. Liberty, NY: W. T. Morgan & Co., 1873. Pages 292-293.) 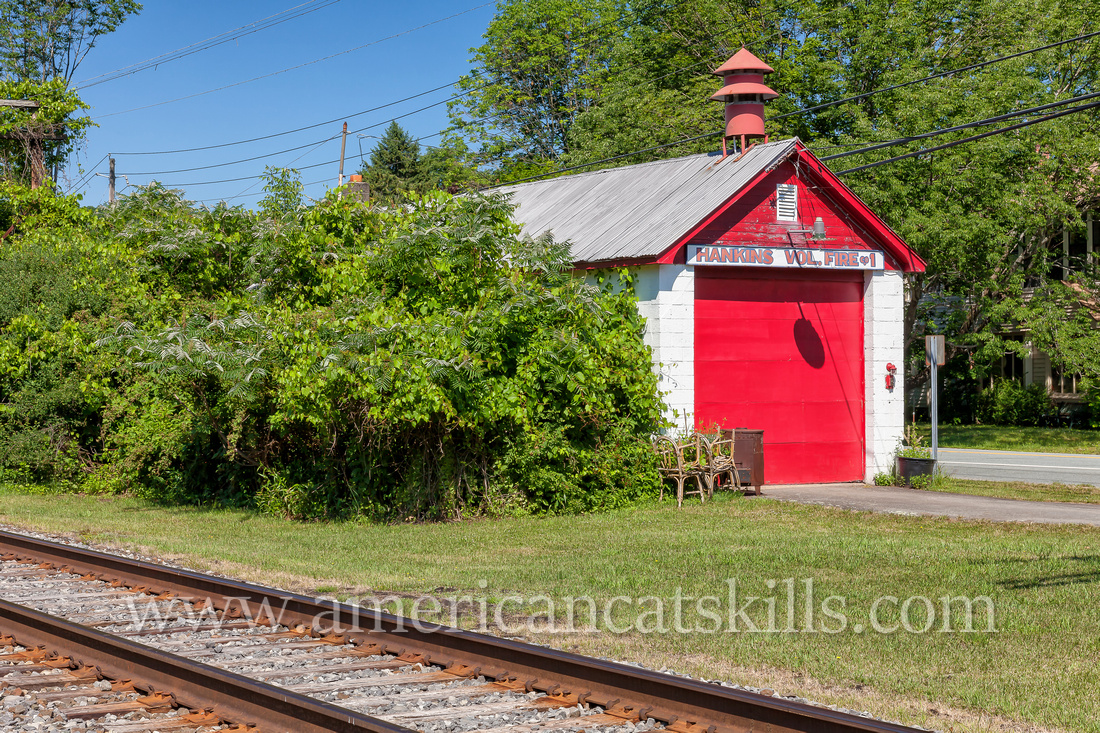 The Commemorative Biographical Record of Northeastern Pennsylvania, published in 1900, offered great detail about John Hankins and his family. “John Hankins, our subject’s father, was born and reared in Pike county, and throughout life engaged in lumbering and in the mercantile trade. Moving to Liberty township, Sullivan Co., N.Y., he purchased a large tract of land, on which he erected two sawmills, which he successfully operated, and did an extensive business on the site of the present village of Hankins, which was named in his honor. He rafted a large amount of lumber down the Delaware river to southern markets, and continued to engage in this business until his death, in 1847. John and Susan Hankins had a family of eight children, as follows:

(2) Mary, born in Sullivan county, N.Y., in October, 1833, married Col. Zalman Main, of Sullivan county, N.Y., who during the Civil war raised a company in Indiana, and for bravery and valor on the field was promoted to the rank of colonel, having command of an Indiana regiment. He died in 1866, leaving a wife and one child, Florence E., who now resides in Binghamton, N.Y.

(3) Rebecca T., born in Sullivan county, N.Y., is a well-educated woman, was for a number of years a successfully teacher in the public schools, and is now a resident of Binghamton.

(4) Angie E., born in Damascus township, Wayne county, married Capt. C. A. Johnson, of the regular army, who died in 1894, at Washington, D. C., and she now makes her home at Binghamton.

(5) Susan A., born in Hankins, N. Y., in 1841, married David Bush, of California, born in Sullivan county, and they located in Susquehanna, Penn., where he was connected with the Adams Express Company for a number of years, or until his health failed. He died at his home in that place in 1889, leaving a wife, now a resident of Binghamton; one son, Edward, a civil engineer residing in Rome, N. Y., and one daughter, Jessie, who died at the age of sixteen years.

(6) Joh R., born in Hankins, was educated in the New York schools, and when a young man engaged in mercantile business at Little Equinunk, Wayne county. Subsequently he carried on business near Owego, N. Y., for a number of years, but now has charge of his brother’s wholesale tobacco trade, in Binghamton, where he makes his home. He married Emma Buckley, of Fremont Center, Sullivan county, N. Y., and had two daughters – Susan, now the wife of Dr. W. Leonard, of Tully, N. Y.; and Bertha, who died in childhood.

(8) Samuel H., born in Hankins, has a large wholesale tobacco establishment in Binghamton, and is one of the leading business men of that place. He married Lillian Wait, of Hollisterville, Wayne Co., Penn., and has two children, Walter and Winifred.” (Commemorative Biographical Record of Northeastern Pennsylvania. Chicago: J.H. Beers & Co., 1900. Pages 466-467.)