Ellenville Pride: The Boy with the Boot 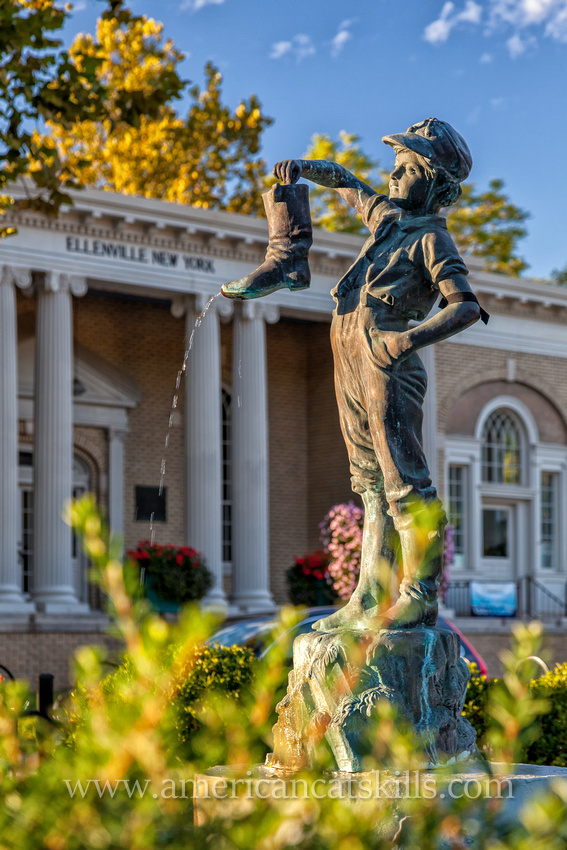 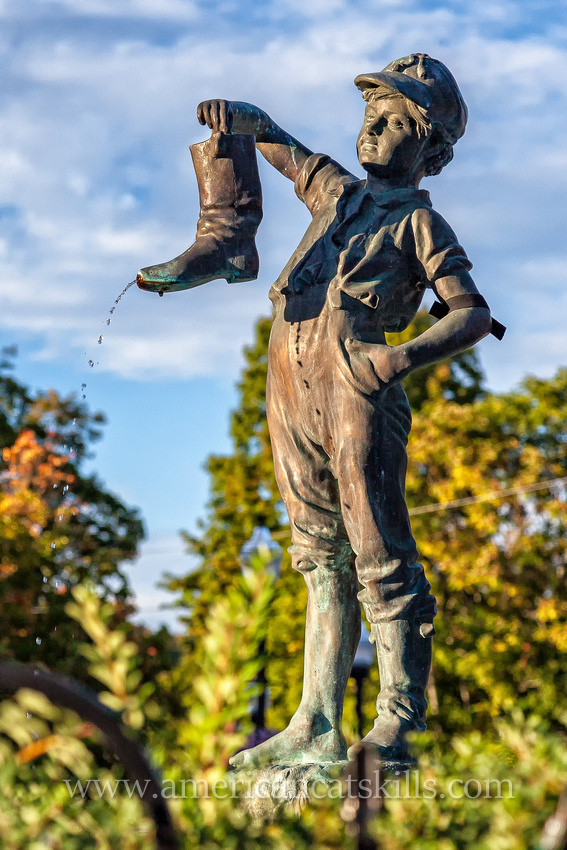 Liberty Square, current location of the 1997 statue, has long played a central role in the history of Ellenville. The southwest corner of Canal Street and Market Street was the site of the first stores and homes in Ellenville. The square was also home to Charles Hartshorn, who served as Ellenville’s first postmaster and who was elected in 1856 as the village’s first president. Today, Liberty Square continues to play an important role in Ellenville, being the home of the historic U. S. Post Office, constructed in 1940, and the beautiful Hunt Memorial Building, constructed 1915-1917, both of which are listed on the National Register of Historic Places.

Marion M. Dumond, former historian for the town of Wawarsing, offers additional details about the history of Liberty Square and its role with the “Boy with The Boot” statue.

“The first fountain was on the lawn of the home of Charles Hartshorn, which stood where the Hunt Memorial Building still stands. Mr. Hartshorn was the first President of the Village of Ellenville in 1856 and a leading citizen. His son-in-law and daughter, Mr. and Mrs. Joseph Tuthill, lived with him and inherited the house at his death. In 1875, they gave a large section of their front yard, containing the fountain, to the Village of Ellenville, ‘for the purpose of a public square, and the maintenance of a fountain thereon at or about the site of the present fountain.’ The deed also stipulates that, if the Village did not live up to the terms of the gift, the land would revert to the Tuthills and their heirs.” (Dumond, Marion M. “The Boy with the Boot.” Wawarsing.net Magazine. December 2002, Issue 1. p. 18.)

Matt Pozorski, the sculptor, operates his own foundry and sculpture services company named Matt Pozorski Sculptureworks, located at Phillipsport, New York. He has completed projects for The American Museum of Natural History and New York City’s Percent for Art program. Pozorski’s role with Ellenville’s “Boy with the Boot” statue was detailed by Beth Scullion in a 2010 article for the Catskill Mountainkeeper.

“So how did our current Boot Boy make his way to Liberty Square? Back in late 1997, Ellenville-resident Iris Friedman approached her friend, Phillipsport sculptor Matt Pozorski, about casting a new 'Boy with the Boot' for Ellenville – a proposition to which the artist readily agreed. Pozorski worked with the original Scoresby statue, which he then restored in return for being allowed to work with it. The statue is now on display at the Ellenville Public Library and Museum.

‘I pulled a mold, or a series of molds, off of the original, and used those,’ says Pozorski of the process. ‘I poured wax into them, to make wax patterns, so I could do wax casting, cast it into bronze, and welded all the parts together.’" (Scullion, Beth. “Shawangunk: So what’s the story with that ‘Boy with the Boot’ statue, anyway?” Catskill Mountainkeeper. (www.catskillmountainkeeper.org). February 3, 2010. Accessed March 27, 2022.) 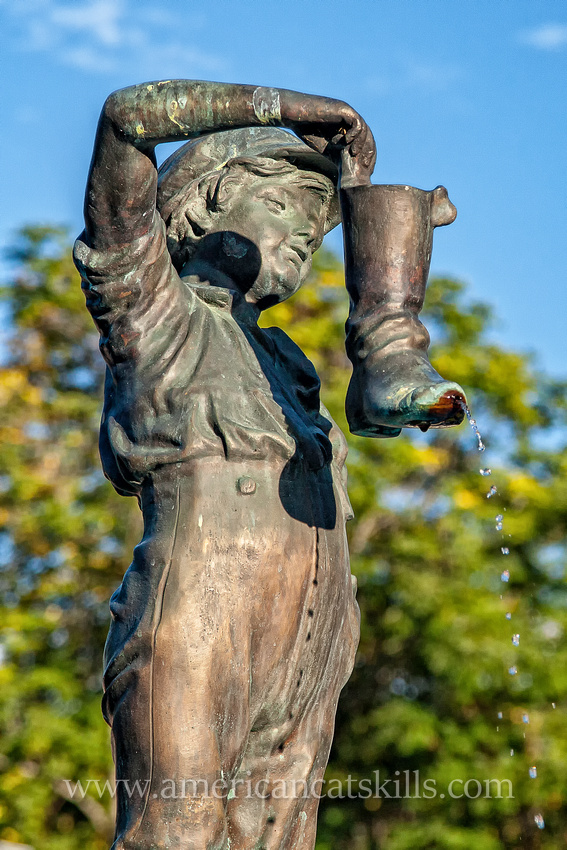 Leaking BootLocated in Liberty Square at the center of Ellenville, the four-foot, bronze “Boy with the Boot” statue has come to symbolize the small Ulster County village. This public Ellenville version was created in 1997 by local sculptor Matt Pozorski. It was modeled after one of the original Ellenville “Boy with the Boot” statues that was located for many years in front of the Scoresby Hose, Hook & Ladder Company.

The “Boy with the Boot” statue, also known as the “Boy with the Leaking Boot”, is not unique to Ellenville however, as there are similar statues throughout the United States. States where “Boy with the Boot” statues are known to exist include California, Colorado, Iowa, Kansas, Louisiana, Maine, Michigan, Mississippi, Montana, Nebraska, New Jersey, New York, Ohio, Oregon, Pennsylvania, Texas, Vermont, Virginia, Washington and Wisconsin. International locations include Canada, Cuba, England and Sweden. Each has their own distinct story, including cost, installation year, being lost, decay from the weather, theft, vandalism and accidents, but each also has their own unique role in the history of their respective communities.

Each “Boy with the Boot” statue is typically quite similar, with a young boy, with a slight look of amusement on his face, wearing a cap, his shirt sleeves rolled-up, with a bare right foot and his right pant leg rolled up to the knee, left hand in his pocket with the thumb sticking out, while in his right hand he holds a leaking boot out in front of himself. The statue is typically affixed on top of a pedestal and/or fountain and is located at a park, museum, library or town building. Some, like the Ellenville version, retain their metallic appearance while other versions are colorfully painted. The original manufacturer offered several different sizes and shapes for the basin portion of the fountain underneath the statue, ranging from 7 feet, inches to 12 feet 6 inches, with either a round or octagonal shape. 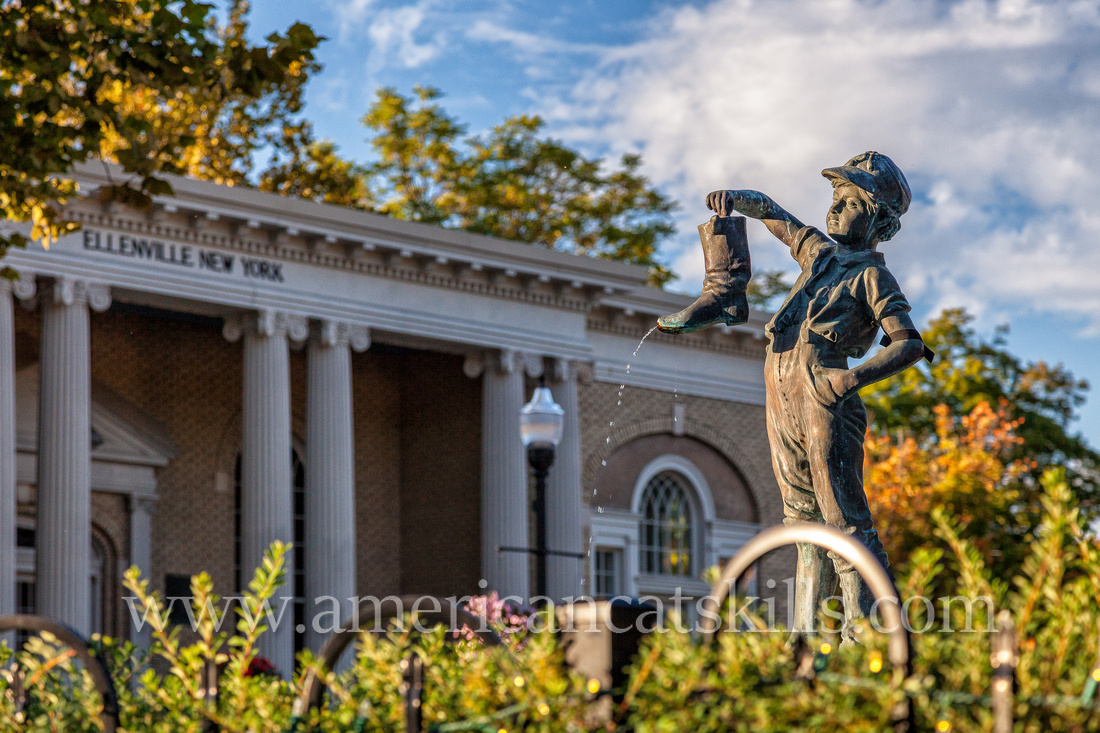 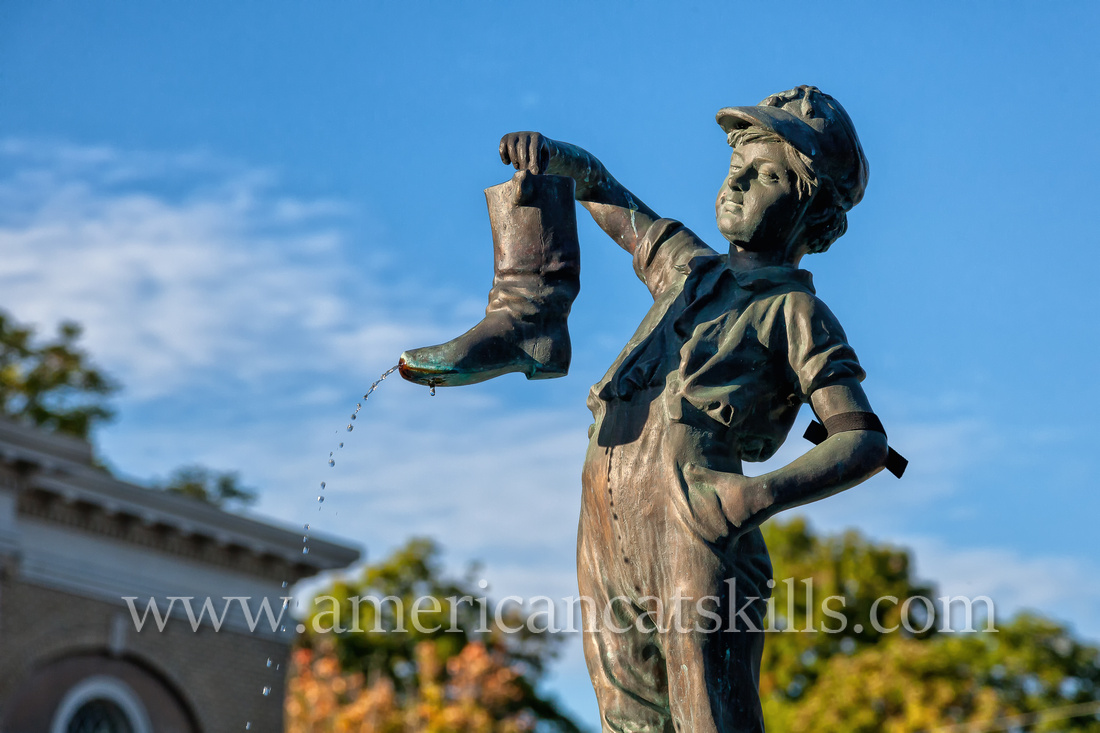 In 1894 the city of Hillsboro, Ohio installed their own version of the “Boy with the Boot,” with the statue being beautifully described in the local newspaper.

“The design is a departure from the old stiff and staid styles, alike refreshing and delightfully attractive. This bright and cute conceit has been very appropriately been christened “The Unfortunate Boot.” The merry-faced urchin who holds aloft his much-abused footwear, is the typical boy. His counterpart can be found in flesh and blood in a thousand happy Highland homes. How his mirthful, careless glee takes us back to the days when you and were like him! Though that time may never come back, the old thrill of pleasure tingles through our veins as we gaze on this juvenile with his “Unfortunate Boot!” What a subject for the poet and the painter! It is such things that break like gleams of sunshine through the shadows of mature life. Without glad fancies that now and then flit across our pathways, life would be dreary indeed.” (“A Touch of the Beautiful.” The News-Herald (Hillsboro, Ohio). March 22, 1894.)

The statue was originally known as the “Unfortunate Boot” and was first produced by the J. L. Mott Iron Works company, who offered it for sale via their catalog. The statue was first advertised for sale in the company’s 1875 catalog. The company was founded by Jordan L. Mott (1799-1866), an American inventor and industrialist, in 1828 at what is now known as the Mott Haven neighborhood in the South Bronx area of New York City. J. L. Mott is credited with being the inventor of the first coal-burning stove. The company became highly regarded for manufacturing a wide range of products including stoves, fireplaces, household products such as tubs, sinks and urinals, iron pipes, water tanks, drain and manhole covers, drinking fountains, lamp pillars, gates, statuary, garden furniture and much more. Jordan L. Mott, Jr. (1829-1915) succeeded his father as owner of the foundry business.

The first statues appeared in the United States in the late 19th century. The artistic origins of the statue are unknown but that hasn’t stopped several legends from developing. Three of the more popular theories include an American army drummer boy who carried water in his leaking boot for his fallen comrades, a young fire fighter carrying water with his boot as part of a communal bucket chain to put out a fire and a young newspaper boy who drowned.

For more information about the statue’s history across the United States see Mary’n B Rosson’s book titled The Mystery of the Boy with the Leaking Boot. For a listing of many of the known statues throughout the United States, see Carol A. Grissom’s book titled Zinc Sculpture in America 1850-1950 (pages 330-337).