Dolan’s Lake, is scenically located adjacent to the Schoharie Creek at the base of Hunter Mountain in Greene County, New York. The park at the lake is a popular summer swimming destination, with public fishing, walking paths, picnic tables and a pavilion also available.

Dolan's LakeDolan’s Lake is scenically located adjacent to the Schoharie Creek at the base of Hunter Mountain in Greene County, New York. The park at the lake is a popular summer swimming destination, with public fishing, walking paths, picnic tables and a pavilion also available. The lake is named for Michael Buddington Dolan (1861-1931), “one of the most prominent men in Greene County, and a lifelong resident of Hunter.”

Dolan’s Lake Park is home to a memorial in honor of the September 11, 2001 attacks. The memorial includes two 14-foot-high steel towers from the World Trade Center, an American flag and a bronze plaque. The plaque reads: “10th Anniversary of 9/11. This monument of WTC steel is dedicated to all were lost on 9/11/01 and to our heroes who made the supreme sacrifice. Never to be forgotten.” The memorial was installed in 2011 through the collaboration of Joe Jove, a retired lieutenant of the New York City Fire Department and a member of the Hunter Mountain Hall of Fame, and David Slutzky, one of the owners of Hunter Mountain.

James Dolan, Michael’s father, was an Irish immigrant who first worked as a tannery worker and later became a farmer at Platte Clove. James was also a veteran of the Civil War, having served with the 15th New York Engineers. James passed away in 1899, and was survived by his wife Mary, eight sons and five daughters, with three of his children having died. Both James and Mary, Michael’s parents, are buried at Saint Francis de Sales Cemetery at Elka Park, New York.

Michael married Lizzie Patricia (Lackey) Dolan (1859-1947) at the “parochial residence” on Thanksgiving Day in 1888. She was the daughter of Michael Lackey, Sr. (1815-1901) and Catharine Burke (1825-1905). Michael Lackey, Sr. was born in Ireland and immigrated to the United States with his parents in 1829 at the age of 14. He received an education at night school in New York City. After moving to Tannersville, he continued his trade as a house painter and also operated a country tavern. Lizzie is buried at Saint Francis de Sales Cemetery at Elka Park, New York.

A combination of local, government and newspaper records show that Michael certainly had a diverse career. In addition to operating Dolan’s Lake as a tourist attraction, he operated the Half-Way House between Hunter and Tannersville. In 1896 it was reported that Dolan had exchanged this “saloon property” with his brother-in-law M. Lackey, Jr. for a farm.

In 1908 Dolan was reported as operating the livery at Hotel St. Charles during the summer months. The hotel was highly regarded in the Hunter area. “This hotel, which is situated upon the highest elevation in the Catskill region, occupies a desirable location on what is known as Breeze Lawn Farm. The building is seventy-five feet front, one hundred and sixty-three feet deep, and four stories high. It has broad piazzas on three sides, and is equipped with all modern improvements, including passenger elevator and telegraph office. With the annex it has accommodations for two hundred guests. The table is supplied with fresh cream, butter, eggs, and vegetables from the farm connected with the house; and the service is of the best.” (Biographical Review Containing Life Sketches of Leading Citizens of Schoharie, Schenectady and Greene Counties, New York. Boston: Biographical Review Publishing Company, 1899. p. 403.)

During the early winter months of the 1910s Dolan would travel to New York City to sell Christmas trees. In 1913 his partners included his son Robert and Frank Carr. In 1918 it was reported that Dolan was robbed at his city tree stand. “It is said that M. B. Dolan was held up and robbed in New York, and that thieves stole Christmas trees from his stand on the river front. He knew what he was talking about when he said ‘Good-bye, God; I am going to New York.’” (The Recorder. Catskill, New York. December 27, 1918.)

For many years, Dolan operated a prospering ice business, cutting the ice each winter from his lake. He would supply the local hotels as well as fill his own ice houses.

Beyond his business activity, Dolan was very active in the community. He was member of the Kingston Council, No. 275, of the Knights of Columbus and was a member of the Catskill Lodge of Elks. He served as president of the village of Hunter for several years. He was long affiliated with the Democratic party, including serving as an active member of the County Democratic Committee.

Dolan established the artificial lake sometime in the 1910s or the early 1920s. The lake was a popular establishment with summer visitors. A 1922 newspaper advertisement talked about the lake and its popular features. “Dolan’s Lake in the Heart of the village of Hunter, N.Y. Now open to the public for Boating and Bathing. Dressing booths. Lake well illuminated at night. High class refreshment parlor on premises.” (The Windham Journal. August 10, 1922.) In the early times of the lake, winter was also a popular time to visit the lake. Ice skating was a popular activity. Ice was harvested during the winter time. 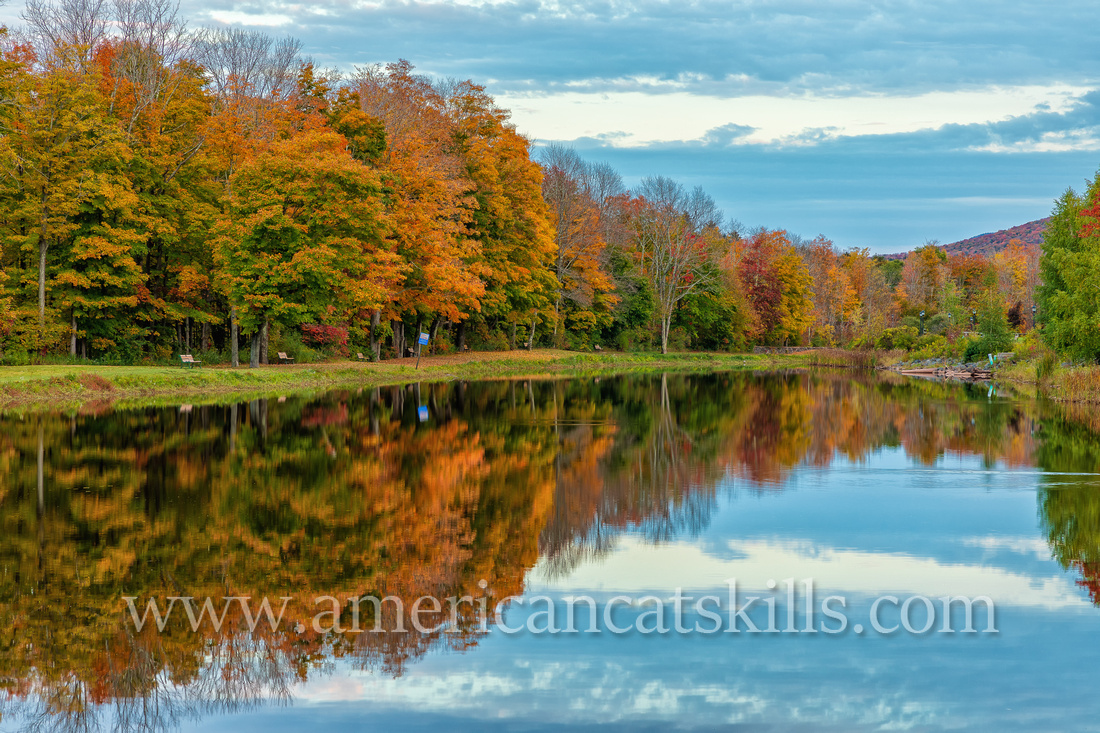 Dolan's Lake at DuskDolan’s Lake, is scenically located adjacent to the Schoharie Creek at the base of Hunter Mountain in Greene County, New York. The park at the lake is a popular summer swimming destination, with public fishing, walking paths, picnic tables and a pavilion also available. The lake is named for Michael Buddington Dolan (1861-1931), “one of the most prominent men in Greene County, and a lifelong resident of Hunter.”

In 1929, flooding of Schoharie Creek caused much damage to Dolan’s Lake. Local newspapers reported on the storm’s effects. “Trees of all sizes and heights once covered the site of the lake and held the creek in leash to some extent, but during last year’s November freshet the creek broke through below the upper bridge, tearing out the bank and creek sides of the lake below and rushing with tremendous suction over and around the abutment of the middle bridge. A hole was made in the once shallow creek bed to a depth of 15 feet along Mr. Jackson’s property.” (“Big Concrete Jobs at Hunter.” Stamford Mirror-Recorder (Stamford, New York). October 29, 1927.)

In response the flooding Dolan went to work the next year to repair some of the damage to his lake. “Mr. Dolan’s activities consist of building a barrier wall along the bank of the creek below the upper iron bridge, 4 to 8 feet high of boulders and lesser stones, and then from the filled upper lake end scraping the gravel up against the inside of the wall. About 400 tons of gravel will be moved. Added to this work is that done last spring, such as repairing bulkheads and building wall at the lower end.” (“Big Concrete Jobs at Hunter.” Stamford Mirror-Recorder. Stamford, New York. October 29, 1927.)

A few years later, in September 1930, tragedy again struck at Dolan’s Lake when a fire broke out, destroying both the restaurant and the pavilion. It was reported that the windows were boarded up, and the inside was in flames before the fire was discovered, so the structures were completely lost.

In 1932 flooding again damaged the lake. “At Dolan’s Lake, in Hunter, the flood got in some damaging work not only on the building foundation which now has been undermined about eight feet, but also on the bridge abutment on the south side which shows an ominous crack in the roadway some feet from the bridge. The lot below the dam was badly washed. At the end of this street the Hunter branch of the Central railroad was badly washed out, the tracks being twisted out of line and the roadbed considerably damaged.” (“Storm Damages Mountain Area.” Stamford Mirror Recorder. Stamford, New York. October 13, 1932.)

In 1940 Dolan’s Lake was aptly described by F. A. Gallt in his guidebook titled Picturesque Catskills. “While right in the heart of the village is located Dolan’s Lake, a grand sheet of water, with boat house, bathing houses, refreshment pavilion. 35 boats affording boating, bathing and fishing as well as water sports.” 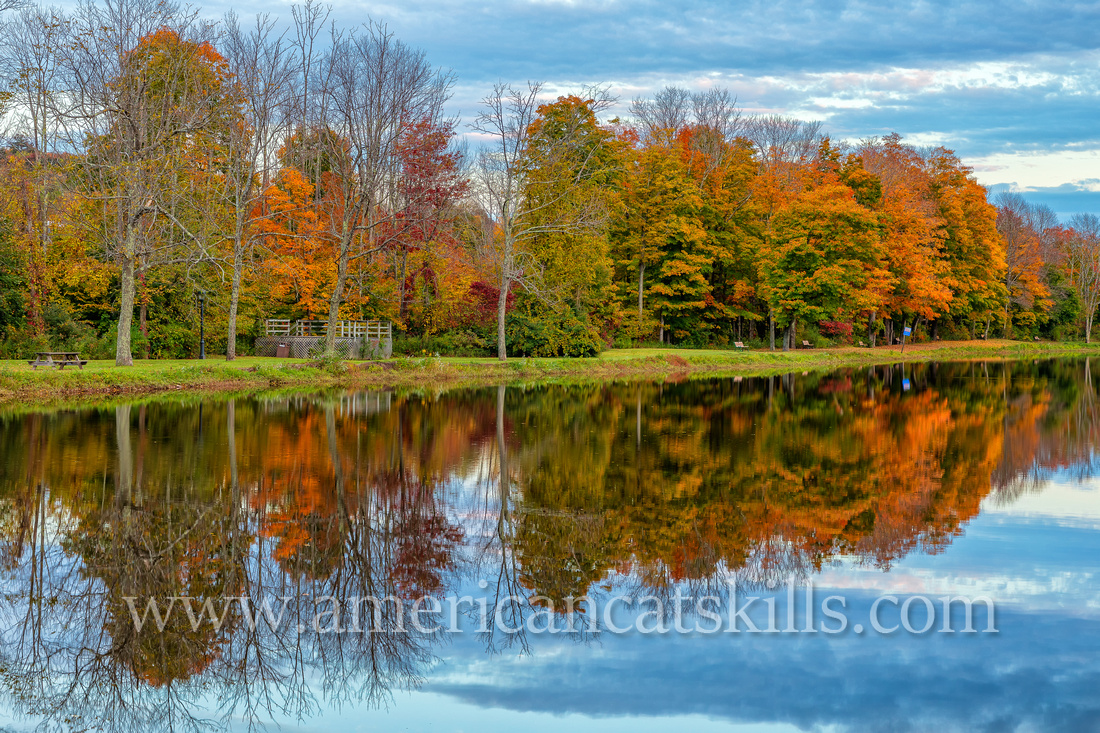 Dolan's Lake ParkDolan’s Lake is scenically located adjacent to the Schoharie Creek at the base of Hunter Mountain in Greene County, New York. The park at the lake is a popular summer swimming destination, with public fishing, walking paths, picnic tables and a pavilion also available. The lake is named for Michael Buddington Dolan (1861-1931), “one of the most prominent men in Greene County, and a lifelong resident of Hunter.”

For a time, in the 1940s, the lake was known as Topps Lake, for the Topps Hotel that operated in the village of Hunter. The hotel had 110 rooms, a hunter lodge and over 100 acres. In 1945 the Topps Hotel was nicely described in a newspaper advertisement. “Ideal vacation resort where fun and relaxation are ideally blended. Delightfully cool. Modern throughout. 100 acres of nature’s splendor. Swimming, boating, fishing. Dancing, Casino, Orchestra. A. Wise. Prop.” (Brooklyn Daily Eagle. June 17, 1945.)

In 1946 benefits of the Topps Hotel were again described in newspaper advertisement. “It’s Topps Hotel at Hunter, N.Y. Decoration Weekend and June Frolic for Honeymooners, & Early Vacationists. Free Golf and Horses. Private Lake. All sports, dancing, orchestra, entertainment. 4-day weekend $32, ($9 day), $45 weekly, choice of rooms inc. bath during June.” (Evening Post.  The property had previously been known as the Alpine House. The lake has also been known as Hunter Lake.